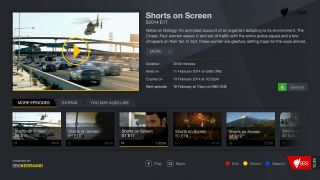 The potential for HbbTV is pretty huge

While SBS has been offering catch up programming via its SBS On Demand app on pretty much every platform known to man – including the PS4 and Xbox One – the one area that has been missing is direct from broadcast TV.

Fortunately, SBS has addressed this by becoming the first Australian broadcaster to begin broadcasting an HbbTV signal, a hybrid network that combines free-to-air broadcasts and the power of IPTV.

The SBS beta, which was switched on overnight, allows viewers of selected televisions to view the SBS On Demand catch up service from their TV remote by simply pressing a coloured button.

The TV then overlays the catch up service over the top of the TV broadcast, allowing you to continue watching the World Cup while browsing the On Demand library.

While HbbTV isn't exactly a catchy marketing term, consumers will become much more familiar with the technology later this year when the free to air networks combine to launch FreeViewPlus, a unified platform for HbbTV broadcasts.

FreeViewPlus promises additional benefits over the initial SBS beta, including up to date EPG and integrated catch up services from all the free-to-air networks.

When FreeViewPlus launches, the SBS HbbTV beta will continue to exist, integrating itself into the unified hybrid broadcast.

The catch with the SBS HbbTV beta is that you need to have a new HbbTV enabled TV to be able to experience it.

While some older TVs may have HbbTV support in the specs, they will most likely need a firmware update (that will probably never come) to be able to access the technology.

Unfortunately though, buying one of these Panasonic panels does not guarantee FreeViewPlus support when it launches in a few months. It may work, or it may not – at this stage there's not guarantee either way.