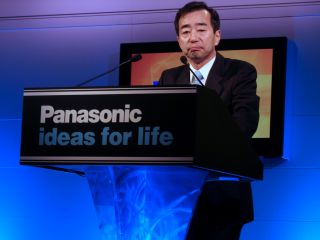 Panasonic chose to focus almost exclusively on its plasma TV offerings at its CES 2007 keynote this afternoon, leaving little room for the company to talk about anything else.

The big news here was that Panasonic has been enjoying some considerable success in the US, claiming 51 per cent market share in the week surrounding Black Friday - the traditional start of the US Christmas shopping season.

Yoshi Yamada, CEO of Panasonic USA, said that plasma TVs were now a mainstay in US homes and that Panasonic had a cost and performance advantage over many of its rivals. This was chiefly because it was a vertically integrated operation making everything from the integrated circuits (ICs) to the flat panel glass that goes into a plasma display.

Mr Yamada also devoted some time to talking about the company's flagship 103-inch plasma. This had found its way into many celebrity homes, company boardrooms and TV studios across the USA.

However the undoubted highlight was the appearance of Desperate Housewives star Eva Longoria (though not in person sadly) who boasted that she had a Panasonic plasma TV in every room of here home. Unfortunately the dusky beauty didn't divulge whether she'd actually paid for the screens or whether Panasonic had simply given them to her in exchange for the CES 2007 appearance.

Another highlight of Panasonic's CES 2007 speech was the launch of a Plasma Concierge service in the US that gives plasma buyers total confidence in their choice of TV. Panasonic customers get the red carpet treatment when it comes to any questions or technical issues they have - something Mr Yamada said should be repeated across the whole industry to much applause from the assembled journalists.

Panasonic was also keen to dismiss a few myths about plasma TV. The company argued that plasma was at the beginning, not the end, of its technological lifespan and that the average Panasonic set had a useful life of 60,000 hours ( or 27 years and six months viewing, based on a six hours viewing per day).

The company also chose to dismiss the 'screen burn' myth on plasmas where static images - like TV channel idents - appear as a permanent ghostly picture on the display. Panasonic said this was only true of first generation plasma TVs - something that many people will have trouble believing.

The company also argued that there was no point anyone making 1080p high definition TVs for screen sizes under 40-inches, and then announced at 1080p plasma prototype with a 42-inch display.