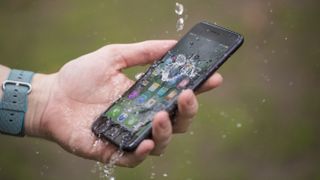 “Liquid damage is the second most common cause of damage with smartphones, representing 35.1% of all devices repaired.”

Those are the words from IDC’s 2016 report looking into the causes of smartphone damage, and it’s clear why more manufacturers are looking to make their handsets impervious to the wet stuff.

It may not be the killer feature that pulls in the sales, but according to a 2016 YouGov poll water resistance is the third most sought-after feature by US consumers, after a shatterproof screen and longer battery life.

Currently, there are two main ways manufacturers can make their phones water resistant. The first is to use mechanical protection, such as gaskets and a completely sealed unit to prevent water from entering the device, much like Samsung has done with the Galaxy S7 and S7 Edge.

This allows the phone to take a dip in a sink or bath without any damage, but causes a headache for manufacturers and means design is somewhat limited.

The other option is nano-coating, which protects phones from splashes and rain – but doesn’t provide protection if your phone is submerged in water.

But that’s about to change.

P2i is a leader in nano-coating technology and its plasma process has been used by a number of big phone and wearable makers including Motorola, Lenovo, Nokia, BlackBerry, TCL, Huawei and Samsung.

It’s working on it though, and in 2018 we’ll see the first smartphones using P2i’s new barrier coating, which not only protects the outside of the phone from the odd splash, but also all the internals too.

This will give handsets an IPX7 rating, allowing them to survive an underwater trip of 1 meter for up to 30 minutes without the need for mechanical protection.

That means manufacturers won’t have to have completely sealed devices to achieve this rating, giving them greater flexibility when it comes to design.

This could potentially see the return of removable back covers and batteries on flagship devices such as the Samsung Galaxy S9, HTC 12 and LG G7 in 2018 if they opt to use P2i’s new level of protection.

The P2i technology sounds revolutionary, but the fact is it hasn't been adopted by every manufacturer.

While some firms, such as Sony, have been making their smartphones water resistant for years, P2i is still trying to convince a number of manufacturers that its technology is what they want.

Things are looking up though, as P2i has seen a noticeable uptick in interest in its technology since the September 2016 launch of the iPhone 7 and iPhone 7 Plus.

These were the first Apple handsets to boast water resistance, and with many tech trends once the Cupertino firm adopts a feature the rest of the market tends to follow suit in more significant numbers.

Dr Stephen Coulson, P2i’s CTO told TechRadar “There’s definitely more interest [in P2i’s offering] now. People looked at the technology before and said it was nice, but they didn’t need it at the time. But when Apple does it, everyone has to do it.”

While we can expect to see a range of high-end smartphones take advantage of P2i’s barrier coating technology in 2018, the lower end of the market will have to continue to wait patiently.

“Going forward it’s all about the migration of the technology down the ranges,” Coulson explained. “The price point today is not low enough for developing markets, so for now we have to aim at mid to high price points.

“As we further engineer the technology we know we can bring the price down over time, it will be a natural evolution.”

Without the need to seal handsets to make them watertight, we’re hoping for some major changes in design direction for the likes of the Samsung Galaxy S9 and iPhone 9 if they opt for P2i’s technology next year.

There’s even the possibility of folding phones, with Coulson saying “in terms of flexible devices and screens we’ll work with manufacturers, and it’s something we’ll build into our design and development.”