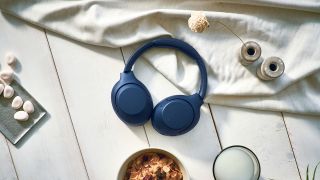 When it comes to listening to thumping EDM and hip hop music, Sony's Extra Bass range of headphones and speakers certainly deliver the goods on the bass department – even if they are lacking somewhat in other areas when compared to the reigning Sony headphones champ, the Sony WH-1000XM3s. In this way they're a direct competitor to Apple's Beats headphones brand.

Now, Sony's looking to bridge the gap between its bass-heavy headphones and the aforementioned award-winning cans, announcing a new addition to its Extra Bass range with the Sony WH-XB900N, as well as a brand new Extra-Bass portable speaker, the SRS-XB402M .

The new headphones bring Sony's celebrated wireless noise-canceling functionality to its Extra Bass range, along with some of the Sony WH-1000XM3's other features, including swipe-based controls and the awesome 'quick attention' feature, which immediately lowers your music's volume and allows outside noise when the right cup is covered by hand.

Boasting a 30-hour battery life, the WH-XB900N are also optimized for use with smartphone assistants like Google Assistant, Amazon Alexa and Siri.

Available in blue and black color options from July in the UK, and from August in Australia, the Sony's WH-XB900N will be priced at £230 / AU$399.95. We're still awaiting official US pricing and availability, but this works out at around $290.

Alongside the new wireless headphones, Sony has announced the SRS-XB402M portable speaker will be joining the Extra-Bass line up.

With dual passive radiators, and "cleverly angled speakers", the XB402M should deliver powerful sound and thumping bass across a wide soundstage.

The wireless speaker also comes with Amazon Alexa built-in so you can "use your voice to ask for your favorite tune, change the volume, and much more", according to Sony.

With 12 hours of battery life and an IP67 waterproof and dustproof rating, the XB402M should sit comfortably in your bathroom, as well as your kitchen or garden.

Sony says the speaker is also shockproof, which means it passed a drop test from "1.22m on plywood of 5cm thickness" – so it should be rugged enough to take along to a party, a picnic, or even the pool.

The SRS-XB402M will be available from July in the UK for £250, which works out at around $320 / AU$460 based on current conversion rates – however, Sony's Australian and US websites make no mention of the new speaker.

We've reached out to Sony for comment and will update this article as soon as we have more information on pricing and availability for the speaker in the US and Australia.