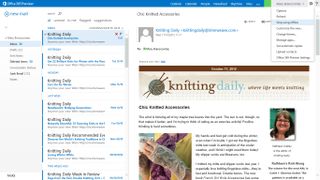 Get Outlook on Windows RT with Outlook Web App and Exchange 2013; it even works offline

Windows RT comes with 'Office'. That may not mean what you think it means.

You get Word, Excel, PowerPoint and OneNote as desktop applications. And you should get the OneNote and Link Windows Store applications as well, since they're included in the Office 2013 licence, just like the iOS and Android versions.

There are limitations on what you can do with the Office applications on RT, because this is the Home & Student version of Office.

Using Office on RT for work

If you want to run a business using Office, you need a commercial licence, but if you already have a volume licence for your business, that will cover you on Windows RT as well (and again, if you have Office 365, that counts).

But whatever licence you have for Office, you don't get and can't run Outlook on Windows RT. There are a couple of reasons for that. The irritating one is that Microsoft thinks of Outlook as a business application, because it's far more useful when it's connected to Exchange, and few home users will have Exchange.

But plenty of people have Exchange at work and will want to get email, contacts, calendar and tasks from it on a Windows RT tablet. The official Mail, Calendar and People applications do some of that - but not all.

The better reason is that unlike Mail and any other Windows Store messaging application, Outlook doesn't work in Connected Standby.

This is the new 'better than Sleep' low power mode for Windows RT and System on Chip PCs (which means new Intel Atoms and some AMD systems). Connected Standby is like pressing the power button on your phone; the screen is off, apps aren't running, but there's still a network connection.

Incoming messages can arrive, whether they're emails, instant messages or even a Skype call, but applications can't keep the PC awake and running down battery.

The fan is off to save power (and because leaving the fan running when you stuff a PC into your bag is more likely to make it overheat than keep it cool). Windows Store applications are suspended, desktop applications think they've been hibernated and desktop services think your PC is running incredibly slowly (in technical terms, they've been throttled).

Say you're sent 100 emails overnight while your Surface RT is in Connected Standby. In the morning, when you turn the screen on the Mail app will already have those 100 messages ready for you to read - even if you're out somewhere with no internet connection.

The same thing happens with Mail on a Windows 8 tablet with Connected Standby, but Outlook won't have any of those 100 emails and it won't get them until you get somewhere with a connection.

If your first meeting of the day has been changed, the Calendar app could tell you but Outlook couldn't. And if someone added an important task to your to-do list in Outlook, you'll have to wait until Outlook gets a connection, because neither the Mail nor Calendar apps show you your tasks.

Getting messages in Connected Standby is just one of the things a Windows Store app can do that desktop Outlook can't.

Windows Store apps can also work with the Share and Search charms, so you can send the recipe you find to a friend by email or search all your email from the Start screen with Mail. To do that in Outlook, you have to go and do everything on the desktop.

Apps to fill the gap

Do you need Outlook on Windows RT? After all, there aren't any smartphones or tablets today that have the same features as desktop Outlook. But the appeal of Windows RT is that it's supposed to give us the best of desktop Office on a tablet.