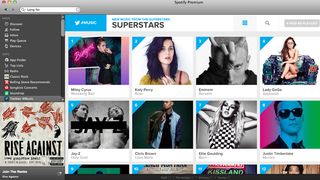 The Twitter Music service has now piped-up as a new app within Spotify, which may turn out to be a more natural home for the service, which has struggled to gain traction since launch earlier this year.

The social network's music streaming and sharing app requires a Spotify login to play full songs. However, upon launch, some felt it could work better as an app for Spotify rather than the other way around.

Now the app, which provides users with Twitter-charts from Superstar, Popular, Unearthed, Emerging and Hunted categories while allowing them to pick from Genres, is available within Spotify's App Finder.

The neatest feature is probably the ability to save charts as Spotify Playlists, which can then be synced for offline playback on desktop or mobile devices.

Using Twitter data to power a music service has always been a good idea, but the idea of a separate app, when most people do their streaming through Spotify and the like may have been a bit of a reach.

The launch of a Twitter Music app for Spotify may restore some sort of balance to the force.