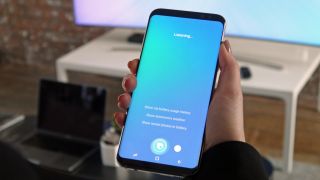 Bixby (Samsung’s AI assistant) isn’t quite the hit the company was seemingly hoping for just yet, not least because the voice recognition aspect isn’t even available in English yet. That’s coming, and other improvements are sure to come too, including possibly some powered by a company Samsung’s just acquired.

Innoetics is a Greek startup which Samsung has taken over, and while the purchase price was low by Samsung’s standards, at reportedly under $50 million (around £38 million/AU$65 million) according to TechCrunch, the company’s voice-to-speech and text-to-speech technology could have a big impact.

Among other things it can apparently listen to someone’s voice and then copy that voice, even saying something completely different.

These synthesized voices are supposedly almost identical to the real voices they’re imitating, and while there’s no word on what Samsung is going to use the tech for, Bixby would seem an obvious choice.

It sounds as though Innoetics technology could potentially be used to make Bixby’s voice more human, and less like you’re talking to a robot – which is something that even the likes of Siri, Alexa and Google Assistant haven’t totally been able to overcome.

We could also imagine the tech being used to create multiple different voices, so you can customize Bixby’s voice.

That’s all speculation at this point – it’s possible that this technology won’t be used with Bixby at all, but that seems unlikely, so don’t be surprised if by the time the Samsung Galaxy S9 launches Bixby is in much better shape, in part because of this acquisition.