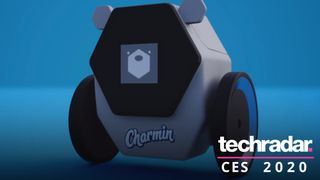 You know that moment of dread when you're finishing your bathroom business and reach for toilet paper, only to find that the roll is finished. It's panic. Sheer panic.

Well, toilet paper company Charmin aims to tackle those less-than-ideal moments with the RollBot, a Bluetooth-controlled robot bear that brings you a spare when you need it (via The Telegraph).

Charmin revealed RollBot at CES 2020 in Las Vegas, where the manufacturer showed off its two-wheeled, self-balancing robot friend.

But how does it work? Well, the RollBot is controlled by Bluetooth so you can summon your paper-wielding pal when you need it. Apparently, the RollBot works a bit like a robot vacuum cleaner and can navigate its way to you, with a toilet roll on its head.

However, Charmin hasn't explained how the robot will collect a toilet roll (seemingly you will need to have it loaded up already) or how it'll actually get into the bathroom. We assume you either need to leave the door open or still do that awkward shuffle from the toiler to the door to pick it up.

Then again, you could just keep your toilet roll in the bathroom, but who are we to judge?

And that's just the start

Not only did Charmin reveal the RollBot, the toilet paper manufacturer also showcased the SmellSense and the V.I.Pee.

The sensor can detect bad smells (high levels of carbon dioxide or hydrogen sulfide). If the smell is too bad then the screen counterpart will warn you not to go into the bathroom and to "wait it out" (with an angry bear appearing on the built-in screen). If it's all good then it'll tell you to "enjoy the go" and a happy bear will appear.

The V.I.Pee, on the other hand, is a fancy portable toilet that comes equipped with an Oculus Rift S VR headset - so you can play VR while you go.

Unfortunately Charmin isn't rolling these products out to the general public anytime soon.

“At Charmin, we’re always on a mission to bring people a better bathroom experience, and while that starts with the best TP, Charmin GoLab allows us to finally expand beyond just the seat,” said Rob Reinerman, Charmin brand director in a press release. “The concepts we’re bringing to CES are a playful way to showcase our relentless obsession with helping people Enjoy the Go now and into the future.”