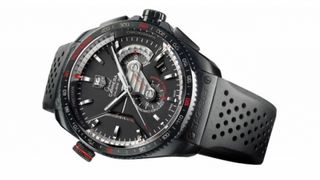 Tag Heuer, the Swiss maker of luxury watches usually sported by a smug-looking Leonardo DiCaprio, could be about to reveal its first smartwatch at CES 2015.

"Industry sources" have been speaking to Business Insider to suggest that Tag will debut its Intel-based wristpiece at the massive tech show in Las Vegas.

The company revealed it's working on a smartwatch when its head of watch operations told a Swiss newspaper so back in September. It's set to follow the majority of smartwatches in providing data on steps taken, distance travelled and calories burned.

Unfortunately, we don't know anything about what the watch will look like. But Jean-Claude Biver - he of the previous paragraph - said it won't just be an Apple Watch lookalike.

Other companies have tried to move away from the black rectangular slab approach of most smartwatches, with the notable example being the Withings Activité. However, this is the first time one of the noted Swiss manufacturers has got in on the smart action.

Smartwaches are certain to figure heavily in 2015 as Apple joins the race and Android Wear gathers pace. And as long as Tag's own offering isn't as bad as its first phone then we're in for a good year.