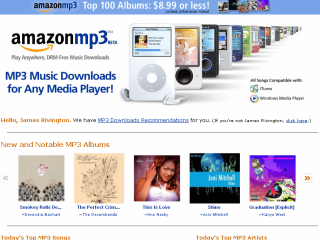 The head of Amazon's new MP3 service says music labels want to give customers DRM-free tracks rather than "confusing" them.

Bill Carr, Amazon's vice president for digital music, said it will be up to customers how they use the music they buy legally. "By and large, most customers just want a great, legitimate way to buy the music they want," Carr told the Associated Press news agency.

"What the vast majority of labels believe is that they will sell more music by giving customers what they want - by enabling DRM-free MP3, than by continuing to confuse customers or force them to choose methods that are not legal, because the legitimate alternatives are not good."

Amazon MP3, launched in the US yesterday, has some two million tracks available - all without DRM copy protection. The tracks can be copied onto multiple devices and computers, burned onto CDs and will work with most types of computers and digital music players, including Apple iPods and the Microsoft Zune.

Tracks - encoded as high-quality MP3 files at a 256kbps bit rate - cost between 89 and 99 cents each, and albums cost $5.99 to $9.99. EMI Music and Universal Music Group are both signed up to sell their back catalogue, as well as thousands of independent labels.

Amazon MP3 is only available in the US for now. A spokesperson for Amazon UK would not comment on whether the company plans to bring the service over here.