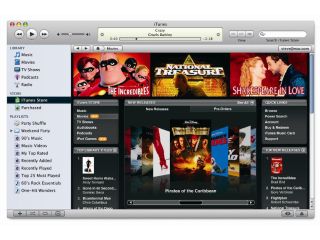 Music bought on iTunes Store locks customers in, working only with the Apple iPod

Consumer groups across Europe have joined forces to demand that Apple scraps the DRM protection in its iTunes Store, stating that it is violating contract and copyright laws in their countries.

Danish, Finnish, Norwegian and Swedish consumer organisations last year started a petition to voice their disapproval over the way digital rights management (DRM) settings in Apple iTunes lock customers in to working only with the Apple iPod . Germany and France have now joined too, a Norwegian official said yesterday.

"This is important because Germany and France are European giants," Norwegian consumer ombudsman Bjørn Erik Thon told news agency AP . "Germany, in particular, is a big market for digital music."

Thon said in a statement : "We believe consumers have a right to play material purchased online on a portable device of their own choice. As of now, the organisations suggest that iTunes allow their consumers to make the songs playable on other devices through re-ripping burnt CDs containing songs downloaded from iTunes."

Apple has yet to act upon these demands despite the group's ultimatum. And a French law that allows regulators to force Apple to make its iPod player and iTunes Store compatible with rival offerings is being introduced.

"Apple is aware of the concerns we've heard from several agencies in Europe and we're looking forward to resolving these issues as quickly as possible," Apple spokesman Tom Neumayr said.

Thon said Norway has given Apple until September to change its policies, or face possible legal action and fines in the country.

"It cannot be good for the music industry for Apple to lock music into one system," Thon said.

The pressure on Apple is likely to grow in the months leading up to the September deadline. But it is unlikely that Apple will back down unless the EU steps in to address the situation.

Chris LeTocq, analyst for Guernsey Research , said it was unlikely Apple would budge from making iTunes Store music available anywhere but on the Apple iPod. "They are the majority market holder with iTunes and the iPod, and they have a business model built around it," he said. "I really don't see them changing."

Apple isn't the only one facing pressure to unlock its DRM. At the MIDEM 2007 music industry conference this week, music executives have been debating the possibility of offering music downloads as copy protection-free MP3 files.