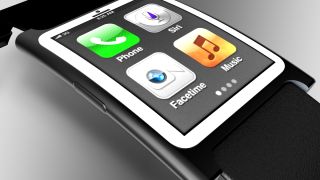 The iWatch is expected to land in October

The Apple iWatch will include a sweat analysis sensor, alongside other biometric indicators, according to reports coming out of China.

The introduction of a sweat analysis sensor into the rumour mix is certainly an interesting new twist, with the Chinese report, from laoyaoba.com, claiming Apple has developed it in house.

A common use in sports training is to measure the presence of electrolytes, which can key into the athletes hydration levels.

That suggests we be looking at an iWatch that will send you a notification when you need to up your water intake, or allows users to track their hydration level's over time within iOS 8's HealthKit app.

However, the sensor which is expected to be joined by the rumoured heart-rate, blood glucose and blood pressure readers in a health-focused iWatch, may be part of what's holding up the production.

The report claims the iWatch specs and design has been finalised and the manufacturing process is ready to begin once the firm gets the nod from the Federal Drug Administration (FDA) in the United States.

Because of all of these sensors and its presumed use with Apple partners like the Mayo clinic, the iWatch would require certification as a piece of medical equipment before going on sale.