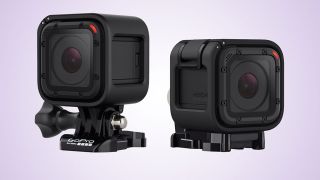 UPDATED: Battery life information and other specs have been included, as well as a brand new HERO4 Session showreel – details below.

If you've always wanted to buy a GoPro camera but were put off by the advanced, pro-level functionality found in GoPro's HERO4 Black, you're in luck – GoPro has announced its most user-friendly camera ever: the HERO4 Session.

Operating the HERO4 Session is easier than it is on any of GoPro's other cameras, with a single button used to perform the majority of its functions – A short press of the shutter button turns the camera on, starting video capture automatically, a longer press powers the camera on and switches it to Time Lapse photo capture mode, and you only have to press the button once more to save your recording or photo and turn it off again.

Just like with previous models, you can further refine your controls and settings by using the GoPro App or Smart Remote.

The HERO4 Session is 50% smaller and 40% lighter (74g) than GoPro's HERO4 Black and Silver, at roughly a cubic inch in size, and has a Micro SD card slot, an non-removable battery (2 hours on a full charge), built-in Wi-Fi and Bluetooth and a Micro USB port, so you can keep it going indefinitely.

Its reduced size and weight means that the HERO4 Session can be placed in areas that were previously impossible, such as on the bottom of a skateboard.

It's also waterproof right out of the box to a depth of 10 metres, without the need for an additional case or dive housing, though it does come with standard and low-profile mount brackets, as well as a new Ball Joint Buckle mount.

HERO4 Session is also compatible with all existing GoPro mounts and accessories.

The HERO4 Session retains GoPro's signature high-quality image capture capabilities, recording 1080p video at 60fps, 720p at 100fps and 1440p at 30fps (those after 4K video will have to opt for HERO4 Black), along with eight megapixel photos in its Single, Burst and Time Lapse modes.

The new model also features auto image rotation, placing your video capture the right way up, regardless of how you attach it to any given surface (it should be noted however, that the image will not rotate once it has commenced recording), and a new dual microphone system which automatically switches its sound recording between two microphones in order to minimise wind noise.