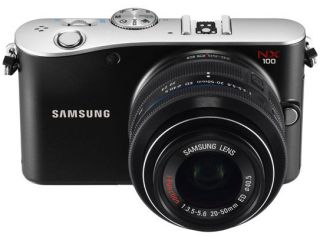 An American camera supplier is listing Samsung's NX100 as 'discontinued' on its website.

The camera, which was announced last year is the company's smallest compact system camera, is fitted with an APS-C Image Sensor and accepts a variety of Samsung NX lenses including the iFuntcion optics.

Samsung's iFunction lenses allow photographers to change controls such as aperture via dials on the lens, rather than on the body of the camera.

US chain B&H is listing the NX100 as discontinued, while Adorama is offering an $180 instant rebate on the camera.

According to PhotoRumors, both new models of the cameras are expected to boast a higher pixel count than their predecessors.

Samsung's current line-up of mirrorless compact system cameras includes the NX100, the NX10 and the Samsung NX11, which was announced back in January.

A representative for Samsung told TechRadar that the NX100 is still a current model in the UK, so don't expect the same bargains you might find in the US just yet.

Stay tuned for more on the new Samsung mirrorless cameras as the story develops.