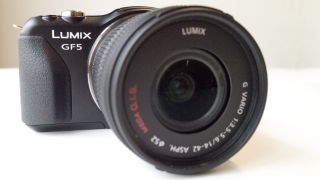 A deeper look at the Panasonic Lumix GF5

Panasonic has introduced the Lumix GF5 less than a year after the GF3 was announced. It features a newly designed 12 million pixel sensor, the ability to shoot up to ISO 12,800, slightly revamped ergonomics and a new user interface. Here we take an in-depth look at what's new on the latest Micro Four Thirds camera.

Despite all its new improvements the GF5 is still predominantly a beginner's camera, with added scope for those looking to branch out and explore their photography more creatively.

To help users on their way the camera provides fully guided tutorials for new scene modes and filters, with on-screen guidance wherever needed. The CSC packs an Intelligent Auto (iA) option and Scene Guides where users can choose from over 20 scenes in five categories.

This ultra-compact lightweight camera can easily fit into your jacket pocket, with a slim weight of approximately 267g (including SD card, battery and body).

The GF5 has incorporated a new high sensitivity 12.2 megapixel Live MOS sensor. Coupled with the new Venus Engine and Multi-process Noise Reduction, the GF5 is capable of shooting an ISO range up to 12,800. This CSC has the potential to perform well in lower light situations. Panasonic claim that the image quality is comparable to the Panasonic G3, a camera with higher resolution.

Claiming to have the world's fastest Auto Focus, of just 0.09 seconds, the GF5 also includes 23 autofocus points which can be accessed via the touchscreen.

The GF5 has 1080p full HD video capability with stereo sound recording. Video is filmed in both MP4 and AVCHD formats. A quick-access record button has also been included.

Carrying on from its predecessor the GF3, the GF5 has an improved 920k-dot touch screen. The majority of features on the GF5 can be controlled via the touchscreen, including changing between mode dials.

The GF5 has a total of 14 filters to experiment with including Soft Focus, Star Filter, Toy Effect. Each of the filters can be further customised via sliders on the touch screen to produce different effects, with the LCD giving a handy preview of how the final image will turn out.

The GF5 has a newly designed handgrip, which was taken from the GX1. Due to its compact size there are not many buttons, but those existing are now made out of metal, which is a first for the GF series.

Panasonic say that the GF5 is a direct replacement for the previous GF3. The GF3 has only been around for 10 months and is due to be phased out. The silver lining is the price tag that now comes with the GF3, with the model going for around £200-£250.