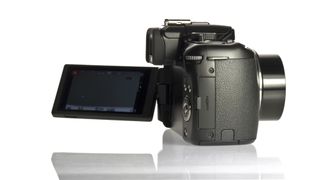 Panasonic has announced that a Getty photographer will be shooting exclusively with its new Panasonic G5 camera during the Olympics.

Dean Mouharopoulous has been granted access to the entire London 2012 Olympic Games as part of his work for Getty, which he has worked with for nine years.

Getty is the official photographic agency of the IOC, while Dean has photographed several large scale sporting events such as Football and Rugby World Cups, the Olympics, Champions League football and World Championships in a variety of sports.

The Panasonic G5 was announced last week and is the latest camera to be added to the Lumix G range of cameras.

It features a 16 million pixel Live MOS sensor, a Venus Engine VII and an ISO range of up to 12,800.

He won't be fighting for a spot to shoot Usain Bolt as he crosses the finishing line though, as 'there's no point in getting the same shot as everyone else'. Instead he will be looking for less extensively documented parts of the games and shooting from more unusual and interesting angles.

Dean will also be equipped with a range of Panasonic G series lenses, including the recently announced 12-35mm f/2.8 X lens. A range of focal lengths from 7mm - 300mm (35mm equivalent 14mm-600mm) will be available to Dean throughout the games.

Images taken with the G5 by Dean will be showcased at the London 2012 Olympic Games Images Gallery at the Getty Gallery based in Westfield Shopping Centre in Stratford.

Panasonic will also be posting Lumix G Photos of the Day on Panasonic's homepage throughout the games.

Update: here are some of the first images taken on Panasonic Lumix G cameras by Getty images photographer Dean Mouhtaropoulos.

JULY 28: A general view of the action at the Beach Volleyball on day 1 of the 2012 London Olympic Games at Horse Guards Parade on July 28, 2012 in London, England. (Photo by Dean Mouhtaropoulos/Getty Images for Panasonic

JULY 30: Lewis Smith of Great Britain in the Gymnastics on day 3 of the 2012 London Olympic Games at the North Greenwich Arena on July 30, 2012 in London, England. (Photo by Dean Mouhtaropoulos/Getty Images for Panasonic)

JULY 30: Competitors compete on day 3 of the 2012 London Olympic Games on July 30, 2012 in London, England. (Photo by Dean Mouhtaropoulos/Getty Images for Panasonic)

JULY 30: Competitors compete on day 3 of the 2012 London Olympic Games on July 30, 2012 in London, England. (Photo by Dean Mouhtaropoulos/Getty Images for Panasonic)