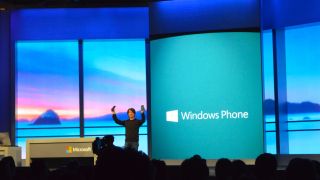 Microsoft has taken the wraps off Windows Phone 8.1, the next edition of its mobile OS, at Build 2014.

The update comes complete with an Action Center, as was widely rumored. The Action Center lets users get notifications from any app, whether they're pinned to the home screen or not, and it's customizable. CVP Joe Belfiore introduced the new center, highlighting its ability to keep users informed of preferred settings.

Perhaps most importantly of all, Windows Phone 8.1 breathes life into Cortana, Microsoft's answer to Siri and Google Now. The personal assistant is powered by Bing, and replaces the search function on Windows Phone.

Belfiore demoed Cortana on stage, showing off her ability to set reminders, read text messages, find search results (like the best Mexican restaurants in Palo Alto) and much more. Belfiore explained that with user permission, Cortana will read emails, gaining access to info like flight schedules.

Cortana lives either as a Live Tile on the Start screen or by pressing the search button, and it's operable via voice or typed input. When users activate Cortana, they'll be taken to the Cortana Home. It's here users will find tailored information waiting for them, such as the weather, latest news and traffic info.

The personal assistant is labeled a beta for now, but Cortana will be available in the US, UK and China in the second half of the year. Other countries will see it next year.

Customization is clearly a big focus with the update, and Belfiore even said that the changes in store are all about personalizing the Windows Phone experience. Can't get much clearer than that.

Users will also be able to customize their Start background screen as well as their live tile themes.

The Lock screen is also getting a personalized touch through new themes. The most noticeable addition here is a diagonal orientation to the clock, date, time and other info. It's not revolutionary, but gives the lock screen a more dynamic look.

Because what's personalization without people? The People Hub has been updated to bring "higher-fidelity" feeds from users social networks, punctuated by larger photos.

There are also a number of apps getting an update with Windows Phone 8.1, including Skype. Skype has been integrated into the Phone dialer, so when you're on a voice phone call, it will "smartly" give you the option to switch over to a video call.

Microsoft is introducing a new Word Flow Keyboard with Windows Phone 8.1, and its akin to Swype. However, Swype and other predictive text apps don't hold an official record for typing speed, Belfiore bragged.

Those forever struggling to find a Wi-Fi network may appreciate a new Windows Phone 8.1 feature called Wi-Fi Sense. The idea behind it is to help users automatically jump on free Wi-Fi networks without compromising security. With permission, Wi-Fi Sense will hop on these networks.

What's more, WP8.1 is so crafty, it can recognize friends from places like Facebook. When they try to connect to your Wi-Fi network, Wi-Fi Sense will securely share the network password with them. It takes away the inconvenience of having to verbally tell someone your password, which for some passwords certainly can be a cumbersome process.

The Photos application will now jump directly to users most recent photos, and organizes pictures by date and location. Online photo albums will be supported by "app- extensibility," meaning third-party service providers can now plug in. Fittingly, the Camera will also see an update, namely a new UI and "burst mode," already found in Windows 8.1.

Finally, Windows Phone 8.1 houses IE11, and (almost finally) Music, Video and Podcasts will all be teased apart and act as separate apps.

Windows Phone 8.1 will roll out to consumers as an update in the coming months. However, it will come pre-installed in new phones starting in "very late April or early May." A developer preview is available today.