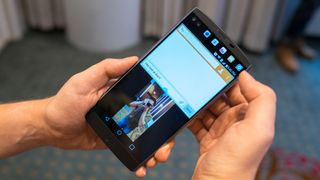 The LG V20's launch is just a month away but we're only now getting our first leaked look at it and, if accurate, it reveals a phone that borrows a lot from the LG G5, but lacks one of the LG V10's best features.

In a series of renders obtained by @OnLeaks for Android Authority we can see both the front and back of the handset, with the front packing a secondary display above the main one, just like on the V10, but seemingly only one front-facing camera.

That's a surprising move and calls the whole leak into question, as it's strange that LG would ditch a defining feature, but as leakers go the source is reputable, so there's every chance it could be accurate.

Around the back the phone has clearly taken liberally from the G5, with a power button which likely includes a fingerprint scanner, but no other rear keys, and with what appears to be a dual-rear camera, which is arguably more useful than a dual front-facing one.

On the LG G5 the secondary lens was a wide angle one, giving you a choice of perspective for your shots and there's a good chance it will be the same here.

It also looks like LG might be bringing modules to the V20, as a button on the right edge looks like the G5's module release button and there's also a lip at the bottom which looks like it might be removable, to slot modules in.

So far the few leaks surrounding the V20 haven't agreed on whether we'll get modules or not, but it would make sense for LG to equip it with one of the G5's best and most underused features.

With a plain back the overall design of the phone looks more like the LG G5 in these leaks than the LG V10, which is at odds with an earlier leak claiming the design would be close to the V10's, so we'd take all of this with a pinch of salt.

This latest leak doesn't reveal anything in the way of specs, but we've heard previously that the LG V20 could have either a 5.5-inch 1080p or a 5.7-inch QHD display – and if these dimensions are right it's probably 5.7 inches.

It's also thought to use a Snapdragon 820 processor and 4GB of RAM for flagship power, have a big 4000mAh battery and a 20MP or 21MP camera, while LG itself has confirmed that it will run Android Nougat.

If these rumors pan out then it's shaping up nicely, even if it does only have one front-facing camera. But we'll know exactly what is and isn't true soon, as LG is announcing the V20 on September 6.