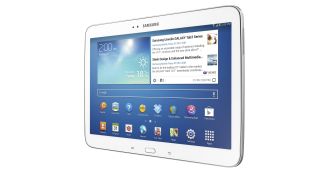 Sleek, slim but can you live with a low-res screen?

Samsung has decided the public needs more tablet confusion so has launched more variants of its Galaxy Tab 3 range.

Joining the already-announced 7-inch version of the Galaxy Tab 3, Samsung is now set to offer an 8-inch and 10.1-inch option for its new top-end tablet.

Except, well, neither is particularly top end. The 8-inch variant features a 1.5GHz dual-core processor, a 5MP camera and 1.5GB of RAM. The screen comes in at a middling 1280 x 800 resolution, which is 189ppi for you sharpness-fans out there.

The Galaxy Tab 3 10.1 sadly keeps the same resolution, and thanks to the scaled-up screen will be down at a fuzzy 149ppi. Given the Samsung Galaxy S4 screen is around three times sharper, we can't see this being an accessory to your new high-end handset, unless you want to be annoyed at seeing pixels left, right and centre.

Power to the Tabs

But both tablets do offer some decent extras on top: both come with Android 4.2, IR blasters to control TV (as well as Samsung's WatchON service for changing channels without having to scroll through TV planners) and have advanced Bluetooth, Wi-Fi connections and audio enhancements for media improvement.

And while price could mitigate these average specs, the Galaxy Tab range has traditionally been at the higher end of the cost bracket- last year's model will set you back more than an iPad mini.

So if you can get past the confusing offering of having to choose between a 7- and 8-inch version of a tablet, don't mind a lower spec and possibly have to put up with a higher price… then this could be the tablet for you.

Samsung is staying tight-lipped on any kind of release date or price for these new tablets, so it's entirely likely some markets will get the 7-inch version and others the 8-inch… stick around and we'll let you know when this info is forthcoming.