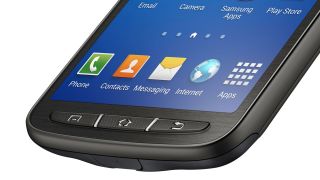 Say goodbye to the Active range

There's less than a week to go until MWC 2014 and news about what we can expect from one of the hottest handsets of the year, the Samsung Galaxy S5, is streaming out as leaks spring up everywhere.

According to sources in Korea, talking to ZDNet, the Galaxy S5 will be the first fully-fledged Samsung flagship to feature the ability rather than relying on an 'Active' variant as seen with the Galaxy S4.

The unnamed source (make of that what you will) claims that "for the previously released Galaxy S4, water-proof and dust-proof capabilities were adapted to the handset's variants. But for the Galaxy S5, the standard model will have them immediately".

We might be tempted to write this off but we've already heard news that Samsung may be moving to make all its flagships waterproof starting with the Note 4. It's certainly no major stretch to imagine that Samsung could have the tech in place for the S5 and would give buyers much greater confidence their prized possession isn't going to fall apart at the first sign of drizzle.

Because of this supposed waterproofing the source suggesting that users will be able to wash the Galaxy S5 under the tap as it can survive short periods whilst submerged. This would certainly put the Galaxy S5 on par with the Sony Xperia Z1, as well as the highly anticipated Xperia Z2.

The reports also 'confirm' our suspicions that the Galaxy S5 will feature a fingerprint scanner built into the home button, requiring a side swipe rather than the finger press that is needed on the iPhone 5S.

This feature is reported to be supplied by US fingerprint solution firm Validity, as well as using an ultraviolet coating rather than the sapphire used by Apple.

We'll be here to bring you all you need to know about the Galaxy S5 from MWC so stay tuned.