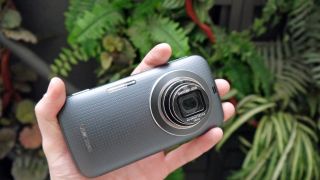 Now touting a "K" moniker, the 4.8-inch cameraphone is a little chunkier than its predecessor, but that might be because it has bumped up specs.

On the camera side of things, it has a hard-to-miss 10x optical zoom lens sitting on its rear, and a 20.7MP 3 BSI CMOS sensor with optical image stabilisation.

With bumped up specs, the new K Zoom manages some decent power with a a hexa-core processor - or rather a 1.3GHz quad-core chip used during the heavy lifting processes (such as image capture and editing), and a 1.7GHz dual-core chip to take care of more mundane tasks.

On the phone side of things, you get a 1280 x 720 display, 2GB of RAM and a paltry 8GB of internal storage, but thankfully there is a microSD card slot.

Android 4.4 KitKat runs the device, while a 2430mAH battery keeps things ticking. You also get 4G and NFC for easier transferring of all the snaps Samsung expects you to take.

The Galaxy K Zoom will come in black or white and with an RRP of $749 from all major retailers across Australia. The handset will also be compatible with Gear Fit, Gear 2 and Gear 2 Neo.