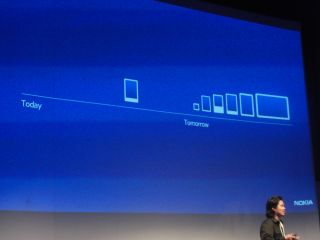 Microsoft has seemingly outed the designs for the next generation of Windows Phone 8 devices.

Last week a leaked video mentioned four new screen resolutions for Microsoft's next iteration of its mobile platform, but didn't mention what form these would take.

However Albert Shum, the General Manager of the Windows Phone Design Studio, showed TechRadar a slide at Nokia World where today's Windows Phone becomes just one of six devices.

Claiming this was "something we're still working on," he said "you want an ecosystem that's not just about having just one or two things; you want diversity."

Tablets on the roadmap

Explicitly positioning Windows Phone alongside PCs and tablets, he added: "If you do well not just on phone but on PC and on tablet, then your ecosystem can really live and breathe" – so it's unlikely that the largest device on this slide would be a Windows Phone tablet.

That would be confusing for Windows 8 on ARM, and would contradict what Steven Sinofsky told TechRadar; "for us the phone is uniquely focused on the small form factor".

From the relative sizes on the slide, the largest is a 5-inch tablet, discounting the largest as a separate Windows 8 tablet.

Although HTC has two 4.7-inch Windows Phone devices already, the 480 by 800 screen resolution isn't enough to make the most of the screen.

Adding a higher resolution for larger screens will make Apollo better placed to compete with 5-inch and 7-inch devices like the Samsung Note and the Kindle Fire.

The other three form factors look like a smaller phone (enabling cheaper Windows Phone handsets for the developing world) and two devices with squarer screens, one with a facing keyboard (to satisfy business users) – and a smaller device that may be suited for the youth markets.

If the devices are in proportion, that's a screen just larger than 1-inch; perfect for the Windows Phone equivalent of the iPod nano or competing with current fitness devices.

If Microsoft thinks that's going to be the next big (little) thing, it could be part of the "time-critical opportunity" for Windows Phone that Steve Ballmer sent former Windows Phone president Andy Lees to look after.

We've yet to hear any confirmation over whether these devices are indeed the new form factors mentioned by Microsoft – but it seems an awfully large coincidence at a recent Windows Phone event otherwise.