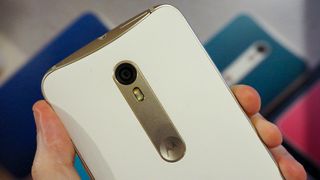 The new Moto X Style will be patched at lunch.

The Stagefright bug - which allows Android devices to be compromised by nothing more than a video MMS message - seems to have jolted the major manufacturers into action as far as security updates and patches are concerned.

Earlier this week Google and both Samsung promised to push out security patches on a monthly basis. That's something you'd expect from Google, as Nexus devices already get first priority with Android updates, but Samsung hasn't always been so nimble in its work.

Now Motorola has promised to up its game in terms of security updates and responsiveness. "We are... working with Google and our carrier partners to simplify the process of deploying critical security updates in the future," explains Motorola.

Motorola's new phones are going to be patched right from the off, so Stagefright can't affect them. The company will also deliver a patch to carriers on 10 August.

Motorola hasn't yet said if it will join Google and Samsung in pushing out monthly updates, but LG says that it is going to, according to an email sent from the South Korean firm to Wired.

If you're worried about Stagefright, there are ways of checking whether or not your phone is affected - if you are, avoid opening video messages until your update arrives down the pipe.