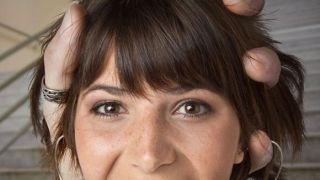 We're celebrating our weekly smartphone round-up Keitai (the Japanese for phone culture), bringing together your favourite sections into four special laugh-a-long volumes for your enjoyment.

We kick things off with the "Scary press shot of the week" collection, where we look into the sinister hidden messages and strange stories placed by manufacturers in their marketing.

Grab a friend, turn off all the lights and take a few deep breaths... here we go.

What's this? A Samsung Giorgio Armani phone that's every bit as fashionable as it is functional?

Look at them. So in love. There's a random lipstick mark on the top of the frame. She's so in love.

Oh, and the phone is huge in picture one, and tiny in picture two. Either that or one of those men has freakishly small hands.

Fun fact: This image was taken just before Mel B (a.k.a Scary Spice) stepped into the ring with Godzilla.

Obviously there was only one winner, and to celebrate Mel B grabbed her tablet (one of the big screens from Piccadilly Circus, London), scaled Big Ben and played online bingo until she was bankrupt.

From there things turned nasty and she ended up using her one phone call at the police station to ask Baby Spice to come bail her out.

We can happily say Scary Spice is now on the road to recovery. Phew.

We all know that early mobile phones were big, but perhaps you've forgotten just how big they were. This shot from 2007 shows off the "dramatic beauty" of the Panasonic P904i.

Its main selling point was the fact it could fold in half – making it just half the height of the average human, standing a proud 3 foot 2 inches in what at the time was known as "crouch mode."

It was the start of the truly mobile era.

Nothing says 'premium high-end fashion phone' than a fat man in a thin man suit.

Sadly the pasty impersonator can't quite fit his excessive gut inside said suit, making for a rather awkward photo shoot with his - we can only assume - equally fat wife who's been squashed into the skin of the girl she hated at school.

Thankfully they're both rocking highly fashionable Xelibri phones to draw your attention away from the clearly questionable ethics surrounding their outfit choices.

As an offshoot of Siemens launched in 2003, the premium Xelibri brand lasted no more than a year. Shocker.

Imagine if your phone was stuffed full of people you know – and every time you added a new contact, they were squashed into your handset. Carrying around your friends and loved ones everywhere you go sounds pretty fun, doesn't it?

But what if you drop your phone? What if your device slips through your greasy fingers and plummets to the ground, and when you look down you see the broken and lifeless bodies of everyone you hold dear, pulverised and splattered like fragile humanoid egg shells?

Not so fun now is it? You monster.

The zombie apocalypse has begun. One of the infected is stumbling around an abandoned school, having just torn the head off its latest victim. You can still see the terror in this poor lady's face as she came to terms with her inevitable fate.

And for some reason T-Mobile thought this gruesome scene would be perfect for an advert on video calling. Disgusting.

Rest easy America, the Moto X is assembled in your fair land - meaning that's it's as pure an American as you, your father, and your father's father.

Trouble is, 'Made in America' may give you a boost of patriotic self confidence, but as this warning shot clearly depicts it'll be about as useful as a sinking car.

It's a little like Phone Booth…but it's with a mobile phone, and the weather is much darker and wetter. The title is Find Me and it stars the one and only Leonardo DiCaprio.

It's not really that scary actually, just a little drizzly.

He may be a world class footballer, but Lionel Messi isn't so impressive when it comes to smartphones.

His first mistake was getting WeChat - the only person he knows on it is his grandma, and she talks FOR HOURS.

Secondly, he's not too hot on using the phone either. In fact, he's not even sure if he should look at the screen. Something about a demon stealing your soul.