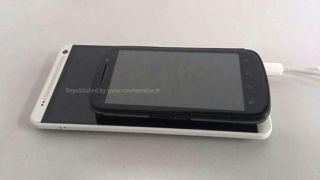 The HTC One Max is a power bottom

The HTC One Max will be truly massive, according to the the latest photo leak.

The alleged upcoming phablet popped up on NoWhereElse.fr (the same site that yesterday brought us a supposed LG G2 manual). It appeared courtesy of the same person who leaked previous HTC One Max photos.

Today's leak is a big improvement, however, as it purports to shows just how big the One Max really is.

Tony Stark was able to build this in a cave

It looks like the HTC One Max may be on the docket for IFA 2013 as rumors of a September release are compounded by HTC's own teases.

Just yesterday the Taiwanese company release a snippet of video involving a briefcase, a helicopter, and a figure who may or may not be Iron Man.

An ominous "big things ahead" tag line accompanied the tease.

Currently, it's thought that HTC will send the HTC One Max into the ring to duke it out directly with Samsung's Galaxy Note 3, and it's yet to be seen which one will turn out more massive.

It could even arrive rocking Android 4.3.