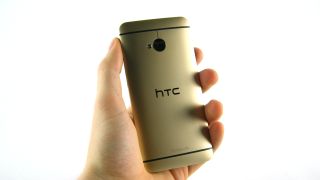 You are GOLD (gold)

Opinion is split in the TechRadar office when it comes to gold phones, some of us reckon they look stunning, while others are less than impressed at the shameless attempt by manufacturers to bling up their mobiles.

Fact of the matter is gold phones are in, with the likes of the iPhone 5S and Samsung Galaxy S4 getting in on the act, while HTC has launched not one, but two gold variants of its excellent HTC One flagship.

The folks over at Phones 4U have sent one over to us, and here's what it looks like.

The gold finish on the front and rear of the handset is broken up by a black band which runs round the edge of the HTC One, engulfing the volume rocker and power/lock key in its darkness.

The etched Beats Audio logo on the rear of the handset is a nice touch and we greatly enjoyed running our fingers across it.

Gold phones run the risk of looking tacky, but we reckon HTC has done a good job on this One and it certainly lands on the side of tasteful rather than tasteless.

On screen it's the same Sense covered Android experience you get on the stock HTC One, although a special gold theme would have been a nice option to have.

Unfortunately for those of you in the US and Australia, there's still no plans to release this version outside of Europe.