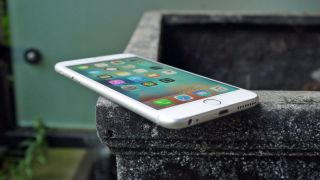 The thought of a curved iPhone screen may seem far-fetched, but there's an increasing amount of evidence for one, not least because we're expecting a radical hardware redesign next year, to make up for the likely small changes on the iPhone 7.

The most recent evidence for a curved screen is an Apple patent, which was granted on June 14 and spotted by Apple Insider.

Dubbed an "Electronic device with wrap around display", the patent shows an iPhone with a flexible AMOLED screen and an all-glass body.

There are already strong rumors that Apple will be moving to AMOLED displays soon and there's been talk that Apple could embed Touch ID into the screen in future phones, which would explain why there's no home button here.

But this isn't the first suggestion of a curved screen from Apple, in fact a very similar patent surfaced back in 2013, so it's clearly something Apple has been exploring for a while.

And there's more than just patents to back up the possible arrival of a curved screen iPhone. For example, back in March KGI analyst Ming-Chi Kuo claimed that the iPhone 8 will come with curved glass panels on the front and back in 2017, which sounds a lot like what we're seeing here.

A window on reality

Alongside the flexible screen patent Apple has also been granted one for a "Transparent electronic device". There are several versions of the device in the patent, but essentially it would consist of a transparent screen like a window, that you can look through and see an augmented version of reality.

For example, it could be used to highlight points of interest around you or provide information on exhibits at a museum.

Augmented reality systems and apps already exist, but they use a phone's camera rather than a transparent screen.

A more ambitious version of the idea detailed in the patent calls for two displays laid on top of each other, with each showing an AR graphic to create a 3D effect.

As always we wouldn't get too excited about these ideas, as patents don't always turn into products, but the curved screen in particular seems like it could be a matter of when, not if.