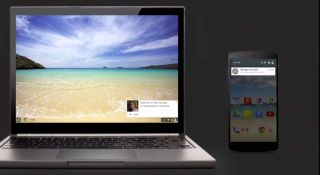 It's ahead of schedule, but we've already got an early look at Android L before it rolls out to the consumers properly - Google wants to attract the developers, and this is the way to do it.

Sadly, the most important thing about the next version of Android remains a secret. We don't know what the 'L' stands for. Google abandoned its pudding and confectionary-based development naming system at 2014's Google IO developer event, revealing that the next big Android release is known simply as Android L.

The Android development team didn't even say if this forthcoming update is to be considered Android 4.5 or the full 5.0 update. But on the plus side, there are still a lot of new features, big visual changes and clever tweaks added to Google's latest refresh to get excited about.

Here are 10 of the most important and obvious changes you'll find, should that phone of yours be lucky enough to get the Android L update at any point in the future.

There will be no mistaking the arrival of Android L on your phone or tablet if you're using an unskinned stock version of the OS, as there are stacks of new visual touches on the way.

Google calls the new changes to the Android UI its "Material Design" approach, one that takes the Google Now cards system and adds depth, shadows and more to layouts across the system, with app elements able to slide into and atop each other.

And look, new on-screen software button icons are in there too, with a triangle replacing the Back arrow, a circle for Home and a simple square for accessing the Recent Apps multitasking menu.

The Material Design look is supposed to give users visual clues as to how things work. Each app element has an "elevation level" that decides how high it can float above over information panels, with on-screen ripples and cues letting you know when a press has registered.

Animation effects kick in as you tap names in the dialler, with "nested scrolling" resizing the top bars and tabs on the fly as you scroll down lists.

Android L also adds seams and real-time shadows to panes as they slide around. And this isn't just for Android either. Google wants to roll out this design ethic across all of its products, with the desktop Google Drive productivity apps set to get a Material makeover too.

The notifications system is finally getting a serious visual jazz-up, with Google transforming its dull grey list into a card-based, white tile system that's fully accessible and actionable from the lock screen.

The posh new notifications animate, pop out and expand using the new 3D layers and shadows, looking vastly more impressive than they ever did in the old style KitKat system.

And there's a new miniature "heads-up" notification too, one that adds a live notification overlay to games being played in full-screen mode without interrupting the action - which you're able to swipe away and continue playing if it's someone you don't really like wanting you to do something you don't really want to do.

The big moan as far as users of every type of smartphone in the world was addressed by Google's Android team, who claim that the "Project Volta" modifications to the code may increase battery life.

When running Android L, Google suggests a user might see up to 90 minutes of extra uptime on the Nexus 5 thanks to Volta and more battery/power management tools, which is significant given that particular phone's rather dismal battery life.

A very clever idea, this. The new Personal Unlocking feature has the ability to learn where you are and what other devices you use, and even use your voice print, as a method of verifying you as the owner of the device.

Activate this and, if the phone's sure it's you using it in the place you usually use it and with the things you have attached to it attached to it, it can bypass the PIN-protected lock screen and let you straight into the phone.

The example Google gave us was of a phone recognising a user had a known Bluetooth device within range, so it deactivated the lock. This is something Samsung had created with its range of wearables and we bet that the two had a little chat about this somewhere in-between shouting about Tizen in hotel rooms.