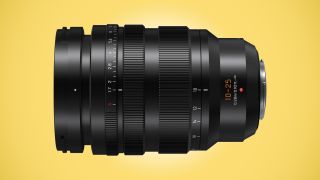 The optic, which is said to be the world's fastest constant-aperture f/1.7 wide-angle zoom, is compatible with the company's G-series cameras like the G9, in addition to other Micro Four Thirds models, rather than its new full-frame S1 and S1R bodies.

Panasonic first announced development of the lens back at last year's Photokina event in September, and the official unveiling follows leaks of the specs and images.

The lens boasts an effective focal length of 20-50mm in 35mm-equivalent terms, and has a constant maximum aperture of f/1.7. Panasonic has designed the optic with 17 elements spread across 12 groups, with three aspherical elements among these, on top of four with extra-low dispersion properties.

The lens can be stopped down to f/16, and can focus as close as 28cm from the subject, giving a maximum magnification of 0.28x in 35mm terms. Its nine diaphragm blades, meanwhile, are claimed to produce a rounded diaphragm for attractive bokeh.

As a more premium offering in Panasonic's lens portfolio, it's no surprise to find the casing has been protected against dust and splashes, and Panasonic claims that it remains operational when used in conditions as low as -10C. It weighs 690g and measures 128 x 87.6mm, and accepts filters with a 77mm diameter via a thread at its front.

As with other recent G-series lenses, the optic communicates at a rate of 240fps with the host body, and this is said to help it deliver fast focusing speeds. The lens also sports a focus clutch system that allows for focus to be quickly alternated between autofocus and manual.

Panasonic has also crafted the lens with the videographer in mind, partly thanks to the inner focus system, which helps focus to be discreet, but also through a design that's said to minimize focus breathing. The de-clicked aperture ring also allows the aperture to be adjusted smoothly and without any noise during recording, while a further micro-step drive system also make these adjustments discreet when panning and zooming.

Panasonic has set a retail price of £1,799.99 for the lens in the UK and it should be available from July 15. Pricing for other territories will be made available shortly.