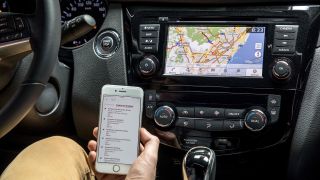 It’s pretty hard to get lost driving a car nowadays, thanks to a huge range of navigation options, ranging from those built into the vehicle through to third-party devices. And then, of course, there’s your own smartphone. In fact, for many of us, Google Maps has just been so good for the last few years that it’s often the go-to option over many in-car satellite navigation systems.

Now though Nissan has unveiled a handy new app that makes the perfect compliment to existing options, with the added bonus that it’ll get you from A to B using door-to-door directions. It forms just one part of the all-new NissanConnect system, which we got to try recently while also enjoying the charms of the revitalized Qashqai crossover.

Much like the car itself, the new NissanConnect system is simply a better, more refined version of what has gone before, and is a much-needed update. While the Qashqai now sports three engine options, one of them being a very zingy little 1.3-liter, which offers better performance and improved fuel economy, inside is where you get some very practical tweaks to make everyday journeys a little more fuss free.

The interior is comfy enough and, while lacking any real attention-grabbing flourishes, offers a warm welcome before you pick your way through the NissanConnect menu itself.

From phone to car

If you buy a new Qashqai, it's suggested that you download the new Door-to-Door Navigation app and install it on your smartphone. From there, you’ll find that it opens up all manner of possibilities, including being able to plan your route before you’ve even left home or the office.

Better still, you can subsequently ping your selected route directly to the car, which means it’ll be ready to get you going just as soon as you get into the vehicle.

On top of that, there’s also the capacity for downloading Over The Air (OTA) maps and software updates. The 3D maps aspect, incidentally, is a really cool improvement that tries to take on anything you’ve got on your smartphone currently albeit in a slightly less refined way.

Meanwhile, fans of both Apple CarPlay and Android Auto will find they both come with all variants of the new model, save for the entry-level Visia. Better still, to help things along, Nissan has spent quite a lot of time replicating the ease of use found on your smartphone within the space of the seven-inch touchscreen head unit that dominates the central dashboard area of the Qashqai.

Nissan was aiming for a tablet-like experience with the new design and that, in essence, is exactly what you get (though it does feel quite small by today’s screen standards).

The multi-touch capability is a real boon, while simple tweaks including single line search functionality makes finding point-of-interest locations a doddle. Customization of the screen area is very easy too, thanks to drag-and-drop functionality and the capacity for creating shortcuts for regular tasks.

We also found the voice recognition capability of the new NissanConnect system to be pretty nifty, with making phone calls, having your messages read out and selecting or editing music choices all being possible on the go.

Another neat trick is the increasingly common Find My Car option, that allows you to pinpoint the position of your shiny new Qashqai if, for example, it’s buried deep within a huge car park complex. For the most part, the touchscreen functionality works well enough, but there is always the potential for finger fumbling and, ultimately, being distracted if you’re trying to do anything too complex. One of the reasons that good old buttons and knobs are often the best option for carrying out tactile commands while driving.

One thing to note is the Premium Traffic information service powered by TomTom is free for five years and, says Nissan, can be transferred to subsequent owners of the car. Another point, and a distinctly more frustrating downside to boot, is that if you already own a Nissan Qashqai then there is no option for upgrading either. The hardware is all-new, which is one of those things that comes with a tech landscape that’s changing by the day.

In fact, there are compromises all along the way really, but the good news is that your options inside the car are many, varied and can be tailored to suit your needs. That’s a good thing. And, as part of the revitalised Qashqai, the new NissanConnect system rounds out a solid SUV package that continues to sell in big numbers.

The new model options are definitely a step up from the Qashqai driven earlier in the year, especially thanks to the support for Apple CarPlay and Android Auto.

The Qashqai is actually the fourth best-selling car in the UK and, with a third-generation model set for 2020 plus these continued improvements in the meantime, that doesn’t look like changing anytime soon.