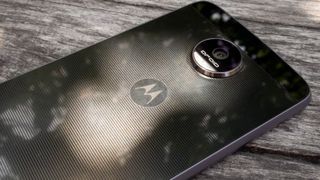 We’re just a day away from a Motorola event where the Moto Z2 Force will almost certainly be announced, yet while a number of renders have leaked, we’re only now seeing actual photographs that supposedly show the phone.

These photos, originally posted by an ‘industry insider’ on Baidu’s Chinese-language forums and spotted by Android Headlines, are an exact match for what we’ve seen before.

They show a phone that looks a lot like the Moto Z Force, with a slim design, a metal shell and a connector for Moto Mods, but with a silver strip running all the way around the back. This is likely an antenna band to help with signal, in place of the large glass panels at the top and bottom of the Moto Z Force.

You’ll also note that there’s a dual-lens camera here, which is likely to be one of the biggest upgrades for this year’s model. Previously we’ve heard that this would be a dual-lens 12MP one, and you can also make out a dual-LED flash, while the front-facing camera appears to get a single-LED flash.

Other changes include an oblong rather than square home button (which likely includes a fingerprint scanner), but with similarly large bezels above and below the screen.

We can’t be certain that these images are accurate, but they match up with the renders and it’s not surprising that someone would have got hold of the phone this close to launch.

Speaking of the launch, we’ve also heard courtesy of reliable leaker Evan Blass that all four US carriers will offer the Moto Z2 Force. That’s worth noting, as the original Moto Z Force was a Verizon exclusive.

It was also a US exclusive, and we’re not sure yet whether the Moto Z2 Force will get released across the pond, but all should become clear tomorrow.