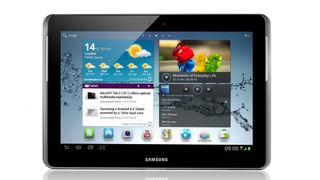 Samsung finally announces the release date of their next tablet

Samsung revealed the pricing and dates for its two new Galaxy Tab 2 tablets at an event in San Francisco.

The Galaxy Tab 2 7.0 and 10.1 are Samsung's first tablets to run on Ice Cream Sandwich, the latest version of Google's Android OS.

TechRadar went hands-on with the tablet at Samsung's European Forum in Prague in February. With front- and back-cameras, the 7.0 is poised to compete directly with the Kindle Fire, especially at that price. The 10.1 may struggle to find a foothold at $400, though.

The Galaxy Tab 2 7.0 was originally slated to be released in March, but the date came and went with little word from Samsung. It was eventually reported that the tablet had been delayed until "late April" due to problems with the Android Ice Cream Sandwich OS.

ICS is meant to unite the GUI aesthetics and functionality of tablets and smartphones, but it's had its share of setbacks. Hopefully the extra month or so has given Samsung enough time to perfect the new tablets.