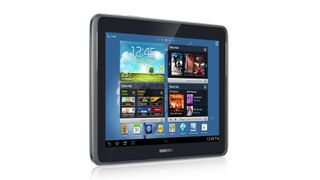 Samsung isn't about to rest on its laurels manufacturing Google's new Nexus 10 tablet, with what appears to be a seven-inch version of the Galaxy Note popping up on the radar this week.

Slashgear reported Wednesday that Samsung Electronics appears to be testing a new seven-inch Android tablet believed to be the Galaxy Note 7, aimed at filling the gap between the company's "phablet" smartphones and their full-sized siblings.

The "GT-N" model number prefix is noteworthy because it's also used by Samsung's existing Galaxy Note II and Galaxy Note 10.1, offering a clue as to where the upcoming product might fit in the lineup.

The plot thickens once you add a recent Wi-Fi Alliance certification for the same GT-N5110 model number - describing the product as a "Wi-Fi and other" tablet implementing both dual-band 802.11a/b/g/n and Wi-Fi Direct support.

Confusingly, that certificate actually points to a third tablet model number, the GT-T8025, which appears to be a different product entirely.

Leading speculation suggests the GT-N5100 and GT-N5110 model numbers denote separate Wi-Fi only and cellular-enabled models, but until the Samsung Galaxy Note 7 hits the FCC, no one quite knows for certain.