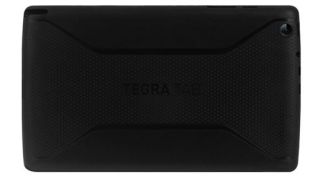 It's got chips down...why not tablets?

On Aug. 8, some images were posted to MyDrivers that show the back of a device stamped with "Tegra Tab" on the back. It has a very Nexus 7-ish quality to it and looks to be about 7-inches.

Additional details for the Tegra Tab, as reported by SlashGear, include a 5MP back camera, microHDMI, microUSB and a 3.5mm audio jack. There appears to be either a microSIM or microSD car slot on the top, with a power button near the top on the left side.

Another rumored feature of this device is that it will come with a styles. Tegra 4, as Nvidia demonstrated earlier this year, responds stylus pressure.

Supplying chips for devices like the next Surface isn't all Nvidia is working on these days.

Fudzilla reported Thursday that Nvidia may be joining the tablet market by creating two tablets - a high-end slate and a low-cost one that may measure seven inches - which will take off early in 2014.

A European source told the site Nvidia wants to launch its own hardware "under its own brand" in a similar vein to the recently released handheld system, the Nvidia Shield.

The specs for the high-end tablet include the Tegra 5 chip, codename Project Logan, which is rumored to use a third of the GPU power of most tablets today, and may also see launch early next year.

The other "cheaper version" tablet will supposedly carry the Tegra 4 chip, a chip found in the Shield gaming device. Other rumored specs include a 1280 x 800 display and Android 4.2.2. The tablet's chip was reportedly clocked at 1.8GHz.

A name has also surfaced for the device, as German language Techtab stumbled upon something called the "Nvidia Tegra Note Premium" on GFXBench. The site currently reveals nothing as it only shows a blank page, however, the URL still contains the alleged name.

Nvidia creating two tablets isn't completely farfetched thanks to in no small part to the self-branded Shield. It makes sense that the company will only continue to expand its line of products, especially since its powering so many other devices. Why not dip into its own well?