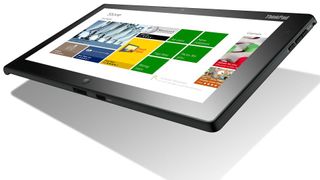 Drip by drip, information about Lenovo's forthcoming ThinkPad Tablet 2 has trickled out, with the latest pinning a starting price on the Windows 8 slate.

According to a company press release, the ThinkPad Tablet 2 will start at $649(UK£405, AU$634). That price does not include the keyboard/dock, which a Lenovo spokesperson said will be available "as an option."

The Tablet 2 will be available in November as well, the release said, though it will debut alongside a slew of recently announced convertibles.

Earlier this month, we learned the tablet would hit in most parts of the world Oct. 26, though some countries might see a delay due to language verification.

Major countries like the U.S., U.K., Germany and Japan will see the tablet first, the spokesperson said.

TechRadar recently got some one-on-one time with the Tablet 2, and while we thought it felt great during use, we weren't charmed by the fact that the tab sits in the keyboard/dock as opposed to actually connecting to it, like the HP Envy X2.

This particular unit ran an Intel Clover Trail processor at 1.8GHz and had several apps running at once with nary a problem.

The tablet (sporting a 10.1-inch IPS display) is set to ship with a full version of Office 2013, while the dock will have an Ethernet port, three USB ports and an HDMI out.

All in all, we felt the ThinkPad Tablet 2 was a solid Windows 8 machine that will be a viable option for many.