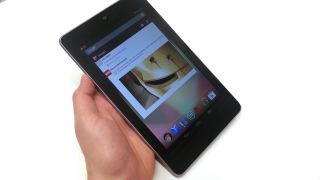 Nexus 7 boasts same magnetic sensor, just on the other side of the display

The Google Nexus 7 tablet features the same type of magnetic screen-lock sensor that Apple employs on the iPad.

The display on the forthcoming Android 4.1 Jelly Bean device switches on and off when a magnet is placed close to the bottom left hand corner of the device, as evidenced in the video below.

This means we're probably going to see a host of covers for the 7-inch ASUS-built tablet, which automatically turn the screen on and off when opened and closed.

A lawsuit waiting to happen?

With lawsuits flying around like hi-fives at a baseball game, we wouldn't be at all surprised if Apple's legal team had something to say about this.

Android Police has studied Apple's Smart Cover patent and report that it relates more to how it "latches on to the device" rather than focusing on the on-off mechanism, so we'll have to wait and see.

The device is scheduled to go on sale later this month in the UK for £159 and in the US for $199 and aims to take a large bite out of the iPad's market share.