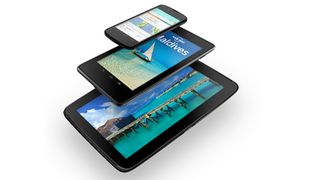 It's all very confusing in tablet land: one minute Apple's making ten-inch tablets while Google settles for sevens, and the next Apple's making iPad minis and Google's unveiling the Nexus 10.

With a display so good you'll be able to see ghosts, the Nexus is a serious bit of kit for a seriously good price - but is it good enough to beat the latest, greatest iPad, the iPad 4?

iPad 4s will start arriving on the 2nd of November, while the Nexus 10 will be "available for purchase" on the 13th of November.

The Nexus is integrated with Google Play and the iPad with the App Store, and while both services have stacks of apps - 700,000 for Apple and Google alike - Apple's offering has more dedicated tablet apps.

Google has just launched the ability to purchase movies to own through the Play store, following the recent addition of Magazines.

At this point though, there's still no dedicated music offering from Google in Australia, although streaming services like Spotify should help you get by.

The Nexus 10 sports a dual-core Samsung Exynos processor with a quad-core ARM T604 graphics processor. The iPad has Apple's own A6X processor, a dual-core design with quad-core graphics.

The Nexus 10 has 2GB of RAM. Apple doesn't publish specifications, but the iPad 4 is believed to have 1GB.

The Nexus 10 is available with storage capacities of 16GB or 32GB, while the iPad comes in 16GB, 32GB and 64GB versions. Both devices need some of that capacity for the operating system, and neither device has a card slot for additional storage.

The Nexus 10 has an accelerometer, a compass, an ambient light sensor and a gyroscope, as does the iPad, but only the Nexus has a barometer. It isn't there to predict the weather: it's to identify your altitude for better GPS performance.

The Nexus 10 has a 9000mAh battery, promising 9 hours of video or 7 hours of web browsing. Apple reckons you'll get 10 hours of web, video or music, and nine hours of browsing using mobile phone networks.

The Nexus 10 has dual-band 802.11b/g/n Wi-Fi with MIMO (Multiple Input Multiple Output), but there's no 3G or 4G version as yet; Apple's Wi-Fi + Cellular iPad supports both 3G and 4G LTE mobile data.

All iPad 4s also support dual-band 802.11n Wi-Fi on the 2.4GHz and 5GHz bands, with support for channel bonding to achieve download speeds of up to 150Mbps. Both devices have Bluetooth 4.0, and the Nexus 10 also has NFC for Android Beam.

The Nexus 10 has built-in GPS, while the Wi-Fi iPad does without. The Wi-Fi + Cellular iPad 4 has GPS and GLONASS, the Russian alternative to GPS.