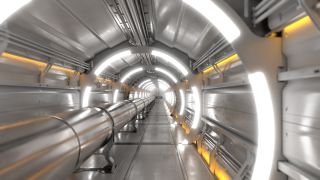 Strap into your wormholes, kids: the massive particle accelerator known as the Large Hadron Collider (LHC) could be getting a sizeable upgrade.

The LHC was opened in 2008, after a decade of development to build the ambitious hadron collider, which uses its 27km tunnel to blast particles at high speeds – sometimes even into each other – to study the sub-atomic world that makes up all the matter in the universe.

Now though, scientists at CERN – the European center for nuclear and particle research – have released plans for an even larger, more powerful version of the accelerator, which would run in a 100km tunnel near Geneva, Switzerland.

Named the Future Circular Collider (or FCC), the new machinery would be capable of "unprecedented sensitivity" in the study of particle behaviour, with over seven times the power output of the LHC.

Where theory and reality collide

The LHC is currently closed for a two-year maintenance period, which will likely last until 2020. As the world's most powerful particle accelerator, ramping up its potential size and power output could drastically change the scale of the research being undertaken.

But solving the mysteries of the universe doesn't come cheap. The new FCC proton collider would reportedly need $16bn of funding (around £13bn or AU$22bn) to dig out the 100km tunnel and build the complex research equipment for its experiments.

Given the lead time needed to get such a complex project operational, CERN is looking towards the 2050s as a possible launch date.