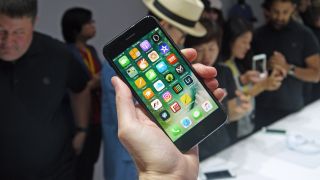 Fans of Apple's Touch ID feature may have to adapt, as the next iPhone could replace the biometric security measure with something a little more in-your-face.

While speculative, Hall's statement matches up previous reports that Apple is considering a new facial recognition feature for its phones that will either replace or work alongside the fingerprint-guided Touch ID.

From a design perspective, a face scanner would potentially fall in line with other rumors that Apple is doing away with the home button (which doubles as the Touch ID sensor on applicable iOS devices) for the upcoming phone, going instead with a screen that could take up the entire front of the handset.

Of course, rumors commenting on rumors (while other rumors run counter to them) are all something to take individually with a grain of salt.

However, as Apple confirms June 5 will be the opening day for this year's annual WWDC showing, we may just learn for sure what the iPhone maker has in store sooner than later.