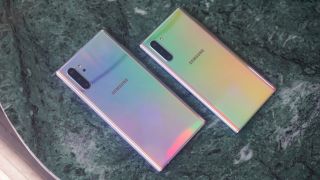 What would be worse for Samsung this year? A new iPhone 11, one that garners a lot of attention and sales but sticks down the same tried-and-tested routes for Apple... or a less-popular iPhone 11 Pro?

The latter has been mentioned online in a recent leak, and it's got tongues wagging: what would the iPhone 11 Pro look like? What would it do? Why does it suddenly exist? Should that be the phone I should wait for?

For Samsung, these are the questions it doesn't want consumers asking - and for good reason following the wave of interest the Note 10 has garnered since launch.

But surely the South Korean giant shouldn't be worried? Apple and Samsung have long since fought in the same space and found that there's room for both - so why would the addition of a tiny word like 'pro' at the end of the name make any difference here?

The Note is no longer alone

Firstly, let's examine what the iPhone 11 Pro would be. Actually, before that it's worth noting (sorry) that this rumor has emerged based on a single tweet (admittedly, from a source with heritage in announcing new iPhone names). So we're going to be mostly working with conjecture here, rather than any cold, hard facts.

“Pro” for iPhone? Crazy naming schemes over the past few years.August 10, 2019

But stepping aside from the meager nature of the source, there are plenty of reasons to suggest that Apple could well be preparing the iPhone 11 Pro... or at least a Pro version of the phone for the future.

Firstly, we've seen (reported) prototype phones leaked onto the web in 2016 that sport the same three-pin dock connector as used on the iPad range to snap on a smart keyboard - so it's very likely Apple has been observing the market for the power user for a while.

However, the brand has been keen to keep things simple in its range, with the formula of a single device only spreading to two variants in 2014. Apple moved to three models in 2017, with the iPhone X joining the iPhone 8 and 8 Plus on stage - but it could be argued that the iPhone XS and XS Max are essentially the same phone, with the larger screen and battery the only differentiator.

Apple's iPhone sales are diminishing at the moment, falling where they were previously in explosive growth. That's partly the reason to push the price of the handset up - Apple being the first mainstream brand to make a smartphone costing over $1,000 to buy - as it sought higher margins to offset the drop in sales.

However, even though other parts of the business are growing to make up the market share, Apple still needs a solid iPhone business to keep itself as one of the world's top brands.

The iPhone 11 Pro would be a great elixir in that respect - a device that would cost more, but would offer something different. Smart covers, a greater range of accessories, quicker charging (given it would almost certainly use a USB-C connection) and a more powerful chipset would be real draws on the shelf.

The only thing is this feels a little too soon - we've not heard many leaks around such a device, and even Apple is more porous these days - so the hunch would suggest the iPhone Pro is for 2020.

That would be the phone that would utterly suit 5G connectivity, a larger or higher-res screen or (whisper it) the first foldable phone from Apple.

That would all spell troubling news for Samsung.

Why would Samsung care?

The Samsung Galaxy Note has been something of a revelation for the brand over the years - where it was once seen as a curio for the businessperson, with the Note 5 not even launching in Europe due to the belief that this market wouldn't care for a stylus, the Note 8 topped 10 million sales worldwide.

With the Galaxy Note 10 Plus leading a range that's predicted to come close to that number, Samsung has found a new section of smartphone user that might not be interested in the standard Galaxy S range.

While there are a number of other brands - notably from China - muscling in on this territory and offering huge screens with loads of power, if Apple joined the fray it would have an obvious impact on Samsung's sales for its most powerful (and expensive) device at a time when the smartphone market is declining.

That decline is precisely the reason brands are offering new features and phone ranges to entice users to upgrade. The same device with some new features isn't that exciting, but if the range offers something else - a more powerful phone to enrich your life, or cheaper device with similar features to save cash - it can keep users in the ecosystem.

We're pretty sure that there's not going to be an iPhone 11 Pro this year - if there is, Apple's managed to keep it smartly under lock and key from all but the most secure parts of the supply chain.

But the mere possibility of its existence lingers - and while it might be a threat to Samsung, it would offer users (and especially those wanting something new in the iPhone ecosystem) something extra to consider.

After all, there were those recent rumors of an iPhone finally supporting the Apple Pencil...