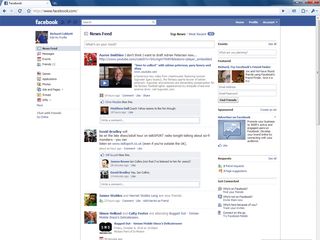 Facebook may be inching ever-closer to the 700 million user mark, but user numbers have begun falling in the UK and US.

Update: Facebook has now responded to and disputed the data reported here.

The US, in particular, experienced its first fall in monthly active users, losing almost six million in May this year.

At the same time, the UK posted losses of over 100,000 active users in May, although overall Facebook users grew to 687 million during the month.

This doesn't necessarily mean that people are actively deleting their profiles, however, rather that they simply aren't using their Facebook accounts.

Other countries that were relatively early to the Facebook phenomenon are also seeing fewer Facebookers, places including Canada, Norway and Russia.

Although it's not a huge surprise to see growth slow as Facebook reaches saturation point in certain countries, overall growth also seems to have slowed down during both April and May, which could indicate a wider loss of interest in the social network.

The company that collated the user data, Inside Facebook, concedes that bugs in its tools and seasonal changes (including better weather) can skew the numbers, so it's definitely not time to start predicting that Facebook will go the way of MySpace.

But now that we've established exactly how successful we are in relation to our most popular classmates and with privacy concerns rumbling on, perhaps our lust to 'Like' is beginning to wane.