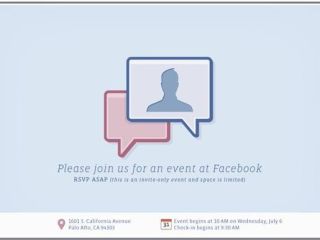 Facebook is set announce in-browser video chat for the social network this week and there are reports that this service will be powered by Skype.

The ink is yet to dry on Microsoft's buyout of Skype but it seems that one of its first partnerships under Ballmer and Co's tutelage will be with Facebook – if a TechCrunch source is correct.

This isn't the first time that Skype has been linked to Facebook. Back in September 2010 the same rumour reared its head and this March it was reported that talks had resumed between the two companies.

Facebook has been linked with video chat as far back as 2009, when it was noted that it was trialling a service that would rival Skype.

Facebook is definitely launching a new service 6 July, with an invite going out to US press. The image on the invite is pretty apparent that some sort of video integration is incoming.

It's easy to see why Facebook would want to integrate video chat. The launch of Google+ last week to a select few individuals showed that Google was using video chat as a main part of its social network – allowing group video chat for those who want to Hangout.