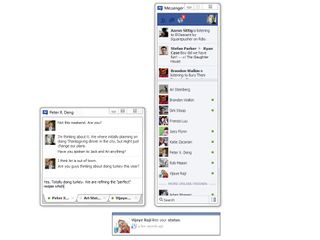 Facebook Messenger for Windows has appeared in the wild, with the client allowing people to communicate to their Facebook buddies without going through a browser.

Facebook's Messenger offering has proven to be a hit on the massive social network, and the inevitable Windows program has now finally made its appearance.

The offering at the moment is currently being tested on a 'small group of people' but you can go and download it from Facebook itself if you wish to give it a go.

"Messenger is a Windows is a new, trial application that lets you use Facebook without being on www.facebook.com," explains Facebook.

"While you surf the web or use other applications on your computer, you can chat and message with your friends on Facebook, see the latest updates from your friends in ticker and get quick notifications about what's going on," the explanation continues.

"We're testing out a first version of the app with a small group of people. During this trial period, we plan on rolling out changes to the app and expect outages and periods of instability as we make improvements."

Of course, Facebook's success has largely been web and app based to date, so it will be interesting to see if a client is popular.

Especially as it is going head to head with the likes of Microsoft's well-established instant messenging client.