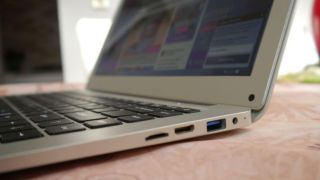 Intel has made plenty of revelations over at Computex 2018 – including several seriously beefy new processors – but not everything is about performance, and on the power efficiency front, the company also made a big statement, promising laptops with a battery life of up to 28 hours.

It’s certainly a bold claim, but Intel reckons that its collaboratively engineered Low Power Display Technology, featured in a 1W panel which is produced by Sharp and Innolux, can literally cut LCD power consumption levels in half.

So that would, unsurprisingly, drive some major battery efficiency increases for notebooks, as the display is the one component which drains the most power in a laptop.

All that said, there are a number of caveats here. Firstly, the tech will only work with Intel’s GPUs, so those with laptops that utilize Nvidia or AMD solutions wouldn’t benefit.

And the claim of up to 28 hours battery life (of local video playback) is an estimate at this point, and the tech isn’t quite there at the moment, as Intel notes that it expects to eventually reach this level through ‘continued innovation’ with its partners.

Also, that estimate is based on using ‘several power saving techniques’ which aren’t specified, while the screen brightness is set at 150 nits (i.e. not very bright) and the speakers not being used (listening via headphones instead).

So yes, there are a number of disclaimers here, but even so, this is certainly a very promising sounding development for notebooks and the quest for all-day battery life (or indeed better than all-day).

We’ll only be able to see if the reality matches Intel’s projected levels of longevity once we get a laptop in for testing which benefits from this new screen technology. Fingers crossed that won’t be too far off in the future.