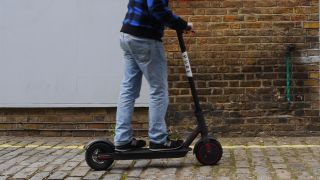 Park your cars, lock up your bikes and burn your shoes, because there’s a new form of transport in cities, and it could be the future of travel – electric scooters.

Electric scooters are faster than bicycles, cheaper than cars (by a long shot) and take a lot less effort to go long distances than walking – and you look incredibly cool on them. But there’s more than that – they’re quiet, small-ish, and more environmentally friendly than driving, so they’re a far more sustainable mode of transport.

If electric scooters are such a great way of travelling then, why doesn’t everybody use them? To find out, I took a Xiaomi M365 Pro to work for a week – for research purposes only, of course.

Bear in mind that you might not be lucky enough to live in a place that’s lenient when it comes to the new form of travel, so check our guide on electric scooter laws where you live before you scoot your way straight to jail.

Electric scooters require you to actually be moving before you press down the power button, so it felt a little terrifying pushing off into the busy traffic on my first commute – my tiny scooter paled in comparison to the massive buses and trucks surrounding me, like I was a pug caught up in a stampede of wildebeest, until the motor kicked in and I sailed away.

It was an exhilarating feeling, coasting alongside these big vehicles without having to put any effort in at all – it also didn’t once feel unsafe, despite the fact I was balanced on a tiny board, because just like cycling you find a way to control your movements to stay upright.

It was a little challenging turning, however. Usually cyclists put out an arm to indicate, so this is what I did when I wanted to turn right – which meant I took my hand off the power button, and stopped dead in the street. Oops.

Fortunately the road was pretty quiet, so I didn’t end up under a bus, but it was still a bit of a shock, and subsequently I made sure to be going fast enough that, when I indicated, I didn’t stop. This was still a little scary given that I was only scooting with one hand, but it did the job.

Talking of pressing the button – try holding down one button with your thumb for ten minutes at a time while going high-speed (well, 20kmph) down the road! It got a little painful after a while, but thankfully traffic lights in my city only spend a few seconds each hour green, so I spent more time waiting than I did moving.

When I could get to high speeds, I found the electric scooter found the perfect balance – it wasn’t so fast it posed a danger to other people on the street, with a max speed of 25kmph (although some scooters go up to 50kmph, which seems a bit much), but I wasn’t so slow that it was a bore.

Soon enough, though, I was zipping among the traffic and barely stopping at lights like any good motorist.

When I got to work that first morning, I was a little shaken, and a little late too (I’d given myself an optimistic half-hour to get to work, but I had to keep stopping to look at a map to find the best routes to travel, which added a lot of time).

I didn’t need a parking space for the electric scooter, nor did I need to lock it up at a station – instead, I took it to work, parked it near my desk, plugged it in, and let the mains power do the hard work.

It’s good that I didn’t need to park it, because finding parking spaces in the middle of a busy city is like trying to find a good Amazon Prime Day deal on Black Friday, and the convenience of being able to take my transport into work saved a lot of time.

Charging the scooter did take a while, but that was never a problem because I was at work so long, and it was a lot cheaper than filling up with petrol so I appreciated the superior fuel.

Getting a handle(bar) on it

After a few trips, I felt like my scooter and I became at one with the road, and I was no longer worried about my place. In fact, my worries shifted from the scooter, which was now just a part of me, to the road, and all the hazards that usually plague my city – pedestrians who’ll cross the road without looking, drivers who don’t know what a red light means, taxis that can only stop in the middle of busy junctions, buses the size of tanks.

When I had my route down, I cut my commute down to 25 minutes door-to-door – that’s less than half the time it normally takes me to walk it, and also shorter (and cheaper) than getting public transport, which takes 45 minutes on a good day.

The only problem I found was that my Fitbit was seriously unhappy about my lack of steps – the roughly 7,000 I’d get each way to work turned into about 5, which wasn’t exactly great for my health.

It also feels a little unsafe to zip along busy streets gulping in all the polluted air, but that’s less the responsibility of scooter riders and more on the noisy cars that clog up our roads. In fact, the silent grace of the electric scooter, putting out no fumes or air pollution, felt like the ideal way we should travel in the future.

Scoot into the future

Steve Jobs once said he thought future cities would be designed around electric scooters. In our diesel-vehicle-loving culture that seems a little far-fetched, but perhaps the world would be a better place if we all scooted everywhere.

The scooter is an environmentally-friendly, unobtrusive and clean way of travelling – if you want any more proof than just looking at them, check out Lime’s environmental stats from 2018.

Electric scooters are super convenient too – it radically slashed my commute time, and was so much more pleasant than cramming myself into a small metal shell with thousands of other people, or slogging for an hour to get to work.

I’d go so far as to say the electric scooter revolutionized my commute, and it could for a lot more people if we embrace it. It’ll take a few more years, for all countries to legalize the form of transport, but we could get there.