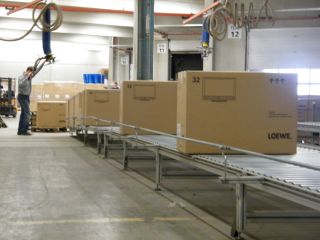 Loewe opens its doors to TechRadar

Situated in the heart of Germany's Bavaria region and with a population of just 19,000, Kronach seems an unlikely base for one of the world's premium TV manufacturers.

There's little in the unassuming but pretty town that shouts out 'minimalism, individuality and innovation' – the brand values Loewe holds so close to its heart. In fact, there are mostly just trees. Lots of trees.

But it's this natural resource that tempted Loewe to the place in 1946, after World War II brought on a forced hiatus for a company whose ties with television manufacturing stretch as far back as the invention of the medium itself.

The reason the locale was chosen: the abundance of wood was needed to make the casing for the company's TVs.

While wood has made way for brushed aluminium and cathode tubes for liquid crystal, the factory still sits at the same location, albeit much more expanded – housing the 1,007 people it currently takes to make the company's high-grade kit.

INDIVIDUALITY: Loewe's Individual range lets you choose the TV for you

Everything from design to R&D, component checking to problem fixing, is done on the campus and all within walking distance from each other.

Loewe's base is nothing like the vast endless factory settings of the Japanese TV manufacturing giants. There's an air of family ties to proceedings, which is understandable given most of the workers come from Kronach and its surrounding areas.

In the factory you're likely to see fathers and mothers working alongside their sons of daughters. In fact, Loewe prides itself on the knowledge that just under 10 per cent of its factory workforce are women, with 150 workers putting in flexible part-time hours to work around family commitments.