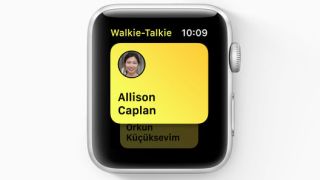 When smartwatches became a thing, everyone kept talking about how it was bringing the ‘Dick Tracy’ capability of talking to your wrist - but that didn’t actually materialize.

With the launch of the Walkie-Talkie app within watchOS 5 though, Apple brought a childhood dream of many to life: being able to chat with a buddy just by talking on the wrist.

There was a key question we were left with though: how hard will it actually be to use? How will you stop being interrupted all day long?

The Walkie-Talkie is pretty simple: you’ll get a list of of cards, with all the Apple Watch owners you’ve spoke to recently at the top (or the option to add more with a tap of the ‘plus’ icon underneath).

Above the cards is the ‘Available’ slider - tap this to the off position and people won’t be able to contact you at all (the same if you’ve got the Do Not Disturb option turned on too).

Tapping the person you want to chat to will move you to a screen packing the yellow circle emblazoned with ‘Talk’ - and you’ll know what to do then.

At this point, the other big question hovered into view: would owning an Apple Watch suddenly mean anyone you knew with a similar device could start shouting out of your wrist?

After all, at the advent of the Apple Watch who didn’t endure a number of rude digital sketches being sent to their wrist from their supposed friends?

The good news for those that work in sensitive offices is that you’ll need to accept the conversation. The person beginning the chat will press Talk, and speak into their Watch - and on the other end, the intended subject will hear a couple of beeps and feel a haptic buzz.

If they want to chat, a tap will play the message. Covering the Watch with your hand will stop the message from blaring out loud - but otherwise you’re going to hear the vocal missive from your pal.

While the first message hangs in the ether until it’s played, from then on the chat is the true walkie-talkie experience you’d be looking for: instantaneous chats from wrist to wrist in pretty high-quality audio. Saying ‘over’ at the end of each statement is optional.

The chats are either sent over Wi-Fi, cellular data (if you’ve got an LTE-enabled Watch) or if you’re connected to your phone, you’ll piggyback on the phone’s connection to get the chats to your Watch.

Once finished, the connection will hang open for around five to six minutes, at which point it’ll terminate. It seems there’s no way to end it manually though, so if you’re chatting away and your boss walks in you’ll need to quickly set yourself to ‘unavailable’ or snap on the Do Not Disturb option, lest she or he hear your chum waxing lyrical their latest trip to the bathroom.

Is it worth the price of a new Apple Watch to just have the chance to chat aimlessly to a friend, when you can just, you know, phone them? Well, such is the nostalgic thrill… kind of.