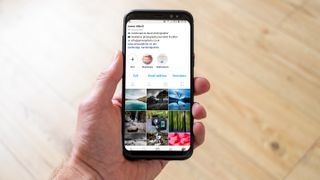 The digital revolution has had one of the most profound effects on photography since the dry plate solved the challenges presented by the wet plate collodion process. Not only is it easier than ever to shoot, edit and print images, it’s also possible to share them with a potential audience of millions. Love it or loathe it, social media in all its many forms is a great way to share your photography. In fact, without it, how many people would actually see your images?

The main social networks used by photographers are Instagram, Facebook, Twitter and YouTube. Each serves a slightly different purpose, although as well as being used to share images, the first three are often used to highlight content created on photographers’ blogs and YouTube channels. And YouTube itself has brought us vlogging, which has made celebrities of some photographers and even provides them with an impressive income. These days, everyone wants to be ‘Instafamous’!

The best thing about social media in relation to photography is that it makes it easy for everyone to share and consume images, ideas, tips and techniques, not to mention meet people and form small communities. So at face value social media has been a force for good for photographers – but it’s far from perfect.

The gatekeepers of social media

Instagram is by its very nature a natural home for photographers; at its core, it’s a network based on sharing images. Here you’ll find every genre of photography, and can follow individuals and hubs that share the kinds of images you’re interested in. At this simple level it’s great, but in recent years algorithms have been used to decide which content is best suited to you, rather than you seeing a chronological feed of posts from everyone you’re following.

This is the same as Facebook, which owns Instagram, and is a result of the company monetizing the platforms through advertising and sponsored posts. Twitter is similar to some extent, although the chronological feed still remains. YouTube, on the other hand, recommends videos similar to ones you’ve searched for, but with advertising embedded in videos you get to see what you want in terms of content, while YouTube and the content creator can generate an income.

Many photographers these days indulge their passion for photography through social networks rather than books, magazines and art galleries as they would in the past, which means new aesthetics are emerging in most genres of photography.

The ability for an image to go ‘viral’, or simply be shared by a hub with a large following, means a new or even existing image concept or editing style can be seen by huge numbers of people. The style will then be copied, sometimes modified, and then shared again.

These image styles are often both creative and interesting, but there’s a certain insular aspect to them that's highlighted the more you see them on a given network. The problem is they get done to death, and can blind inexperienced photographers who see them as a successful option that people like, give a thumbs up to, and leave a comment on. There’s a lot of instant gratification – and who doesn’t love that, but does this represent success, or provide a solid foundation from which to develop?

The idea that photographers go to well-known locations and almost literally ‘insert tripod legs here’ to take the classic shot of a location has been around for decades. But thanks to social media, the global reach of these platforms means people are traveling from far and wide to get their exact copy of that classic image.

One New Exchange in London looking towards St Paul’s Cathedral; a drone shot of Old Harry Rocks looking back inland from the sea, at Lago Di Braies in Italy looking down wooden steps to wooden boats moored at the bottom with misty mountains in the background, various locations in Iceland and many more have all been done to death. I have to confess, I’d love to shoot at all of these places – but at the same time part of me never wants to see an image of them ever again.

Another problem is that when individuals are using social media for all their references (locations, compositions and editing), their view of the world becomes extremely narrow. So why is this a problem? If you’re a serious photographer, or a professional hoping to sell images, you’re going to struggle to make your work stand out from the thousands of images that have already been taken of a classic location. What you need is something different, something that will really stand out.

The democratization of photography

So, has social media ruined photography? The short answer is yes… and no. Like everything in life, there are both positive and negative aspects to its existence. The internet, and to a large extent social media, have ultimately democratized photography.

The days of what was once something of an old boys‘ club, where techniques were closely guarded and only passed down from professional photographer to assistant, are well and truly over. Of course, this does still happen, but type practically any technique into the YouTube search box and you’ll be presented with a plethora of tutorial videos.

The democratization of photography doesn’t owe everything to social media, though. Before Facebook, Twitter, Instagram and YouTube, blogs were the way that people shared ideas online, and the blogging platform remains as strong as ever.

For every positive social media brings to photography there’s a negative, but which way the balance is seen to top will ultimately depend on personal opinion. For me, the way that photography has ‘opened up’ is hugely positive, with people sharing ideas, locations and techniques; there’s never been a better time to learn photography, or to develop your skills and knowledge.

The introspective nature of social networks means some people gather all their inspiration from them, from locations to shoot to compositional ideas and editing style, which is hugely limiting. So it’s important to remember that there are many more places to find inspiration besides social networks and the internet.

Don’t forget to look at books and magazines, and visit art galleries. And who knows where social media will be 10 years from now – it’s impossible to say. But while the current wave is moving it doesn’t hurt to jump on for the ride and use it to your advantage, if there is one.