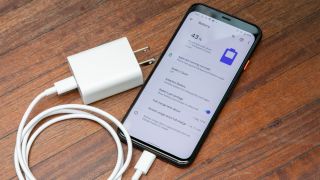 If you've got a Google Pixel 4 smartphone and were disappointed by its short battery life (as our reviewer was), you might not want to think about replacing it just yet – it seems Google could have a fix on the way.

This comes from Android code, spotted by XDA Developers Editor-in-Chief Mishaal Rahman, which names the ultra-low-power mode as a feature 'intended to save battery at the cost of user experience.'

The description makes the feature sound like the kind of battery mode or power mode found in many Android smartphones, which reduce some combination of screen brightness and quality, background apps and data connection.

However the 'ultra' in the name makes this sound like an extension of that which culls even more features, maybe reducing the phone's functions down to calls and texts only - perhaps similar to features previously found in phones from the likes of HTC and Samsung five years ago.

Rahman states this mode will also come in the Google Pixel 5, which we'd expect to see at the end of 2020, and, if true, could suggest Google isn't planning to put a physically bigger battery in the phone and believes that it wouldn't be sacrificing a huge amount of day-to-day power to activate the lower-power mode.

However Rahman also points out that the engineer for this code has previously worked on multiple Google Pixel 4 firmware upgrades, which suggests the ultra low power mode could be brought forward to the Pixel 4 as well (if it comes at all, of course).

The fact this code has been spotted doesn't necessarily mean it's sure to come to a phone, and if it does we're not exactly sure what the mode entails. But if and when this ultra low power mode does come to a Google Pixel device, it could fix one of the biggest issues users have been having with the phone.