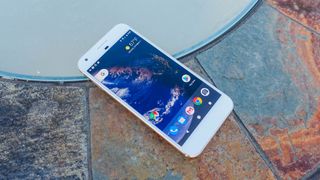 As rumors continue to grow regarding the Google Pixel 2, it appears we may have our best look so far at the larger version of the Google's next-generation Android phone.

A rendering of what is supposedly the 2017 Google Pixel XL has surfaced via Android Police. Though not a final design, the report claims the image is still representative of the direction Google is taking its forthcoming phone.

The image comes from a source Android Police deems "extremely reliable," showing both the front and back of the extra-large handset, as seen below:

While not a dramatic shift from the original Pixel's design, there are still some noticeable changes — primarily a not-as-distinct antenna band, a smaller glass portion on the back, and a trimmed-down bezel.

According to the report, two other features were teased for the supposed 2017 Pixel XL. The first is a six-inch AMOLED screen courtesy of LG, which could help step up the Pixel's display game with the likes of other top-shelf phones such as the LG G6 and Samsung Galaxy S8.

Additionally, the 2017 Pixel XL may also feature squeezable sides as a means of added controls, à la the Edge Sense feature found in the HTC U11.

None of these features are confirmed for the regular-sized 2017 Google Pixel, but then again, Google hasn't confirmed anything about its next big handset, so it's wise to take this news with a grain of salt.

As for when we'll learn more concrete information about the Pixel 2 lineup, Google is expected to make an announcement later this year. In the meantime, we're crossing our fingers that this sweet bezel-less design is here to stay.